Finally the ski season is here!  As you know, I have two big passions, food photography and skiing, and for a few months a year, my life and my schedule become consumed with both.  This year I was lucky enough to be brought back as Crotched Mountains official photographer and videographer, to produce all of their films, commercials, and images this season.  Its and increadible honor for me, beucase few people know this, but this is only my third year on skis!  I’ve loved and admired skiing since I was in middle school, but as a child it was to expensive a sport for my family, and as I got older, I assumed it was a sport beyond me becuase of my age.  Long story short, I started going to Crotched Mountain to learn to ski because my kids started skiing through their school, and it was an opportunity for me to spend more time with them.  Thanks to the amazing people at the Crotched Mountain ski school, now I ski with the confidence and abilty of someone whos been on skis for more than just three years.

This year we had a extensive and ambition production schedule of films and photoshoots, and one of the top projects was to shoot the extensive new menu for the popular Onset Pub, which is the bar pub inside the lodge at Crotched Mountain.  After a few preproduction meetings with the new chef, we set out our schedule, picked our shoot day, and got ready to go.  This shoot was slightly different in that I would be doing minimal if any food styling, so the food that was being shot was straight from the kitchen just as it would be served to the customer.  One of the reasons we could do this is because the new chef at Crotched Mountain is somewhat of a big deal, and he’s the real thing.  Having owned restaurants in Boston and also having traveled the world training under some of the most renowned chefs in various styles of cuisine, the new chef at Crotched Mountain brings with him a world of talent and experience, and it shows in every plate.

Because we were shooting food that was prepared exactly as it would be served to the guests, this meant that we could eat it after it came off set, which is a wonderfully rare thing in food photography.  The shoot because quite the social party as several of the team at Crotched Mountain gathered with us to test the new dishes.  Its one of the things I love about working with them, everything we do feels more like family than like work.  It was a great opportunity to try the new menu creations and get a sense of what was going on the new menu.  Plus we were shooting everything on the menu and that’s a lot of food, so no sense in letting it go to waste.

The setup for this shoot was very basic, because of the ambitious shot list, we need a very generic and wide setup that would work for several different plates and food styles.  Plus there needed to be space for large plates and small plates.  Over the last few months I’ve become quite a wood worker, building a set of new tabletops for my food shoots.  I’m lucky enough to live down the road from an amazing local lumber resource, Wilkins Lumber.  They are an amazing company of good hard working New Hampshire people.  They always help me find exactly what I’m looking for even when I don’t know what I’m looking for.  The tabletop we used was built from pieces of weathered wood that had been discarded for being either cracked or bent.  They had been left outside for a while and had an amazing blueish weathered tone to them, and best of all I got them for a great price.  I used a basic light setup, 2 large octagon softboxes, and shot with my new Canon 6D, which to me has been an amazing camera.  I use the wifi to connect the camera to the EOS app on my ipad so clients can walk around and view the images as I shoot, which has sped up production as well.

I’m beyond excited about the finished product, and I’m confident that these images will be put to use in some great marketing materials as well.  Crotched Mountain has, without a doubt, the best marketing department of any ski resort in New Hampshire, they do amazing things with the media I give them, and they make my work look good.  Being a professional food photographer I have seen food from hot dog stands to five star upscale restaurants, and the food I saw at this food photoshoot was some of the most appetizing food I’ve seen on a shoot in years.  But not only is it beautifully plated and presented, its absolutely delicious!  Its amazing food, it truly is.  These are plates you would find at upscale restaurants in Manchester or even Boston, and they are right here at our local ski resort.  I’m excited for people to see these photos and even more excited to see how packed the Onset Pub is going to be this season. 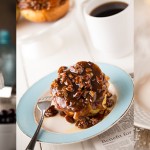