I’ve built Earl Studios on some basic principles, one of them being patience with new video production technologies.  Being a small business, investment in new equipment is a risky gamble, and so decisions have to be made over time after the market has had a chance to bang on them and break them. We started the discussion about getting a DJI Phantom helicopter back in June, considering its use in the production of the NH Tourism Videos we have been shooting and production, as well as the value it would provide to our other clients like Southern New Hampshire University, Crotched Mounted, Loon Mountain, and Tuscan Kitchen.

The investment is significant, first there is the helicopter itself, then a gimbal, plus the batteries are about $130 each and only power the helicopter for about 15 minutes, so we would need to get at least 6.  On top of that, there is the monitor, transmitter, and receiver needed to be able to see what the helicopter Go Pro is seeing to be able to compose shots.  All in all, we were looking at a couple thousand dollar investment, with the question remaining, “would any of our clients use this?”.  On the other hand, we could get a Movi gimbal setup for a few bucks more, or perhaps a second fs100, the options for other gear were extensive as well.  So after 6 months of discussions, budgeting, estimating, we decided to take the leap and buy the DJI Phantom 2 along with a new Go Pro 4 Black.  Ultimately it came down to a few reasons, the biggest one being that as a small video production company in New Hampshire, we compete with some many other companies and individuals.  We compete with big video production companies in Boston, but we also compete with “oh, my neice in college is a videographer too”, so we needed to add something to Earl Studios to make us stand out among everyone else.

I grew up the son of a famous combat helicopter pilot, hearing stories of flying through gunfire in the jungles of Vietnam, and I learned the basics of flying helicopters at a young age.  I understand how they fly, how they operate, and how the move.  So on the first flight with the DJI Phantom 2 out in the front lawn of the studio, it came to me very quickly, because one of the first things I learned about flying helicopters was to make small, minor adjustments to the stick.  That is exactly how you fly the DJI Phantom 2 because that is what will give you the best footage.

My first chance to film with it came on a trip up to the lakes region when we stopped by Kimball Castle, one of the most beautiful, and haunted places in New Hampshire.  The wind definitely affected the flying of the phantom, but I think we got some great footage to cut together a short 1 minute film, which is the plan for the next 30 days, to shoot a series of “microfilms”, which are shorter than short films.  The purpose being to practice filming with the helicopter, but with the feel of a commercial shoot, where we are trying to get actual usable shots, not just “practice shots”.

My goal with the DJI Phantom 2 is to be unique.  A few people in New Hampshire have one of these, and I tend to see very similar shots from everyone, so i’m looking to utilize this as a tool to get unique, original, big budget shots for our clients that add to the production.  In the end only time will tell if I made the right investment, which is always the gamble of owning your own small video production studio in New Hampshire, but I believe it was absolutely the right decision for the company, and I think it was just the move we needed to make. 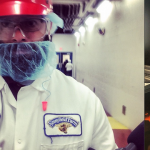