Last week we released our first ski film of the season, “Welcome Back”, with Crotched Mountain.  The film was shot over three days, all while we had no power at the studio due to the Thanksgiving snowstorm, so needless to say, it was a challenging production.  The film features heavily our use of the new DJI Phantom 2 heli and gopro 4 black footage.  The ski film as a whole marks a new direction for us creatively, moving our work in a more cinematic direction.

The opening helicopter shot is one we are most proud of.  We rolled into Crotched Mountain early Thanksgiving morning to get some simple wide and high aerial shots of the mountain with the fresh blanket of snow.  As we were filming we noticed a couple of skiers hiking up and skiing down with their dog, so we timed our shot just as they were hiking back up and got, what we feel, is one of the most beautiful shots we’ve ever done.  On our way out we also managed to get stuck in the snow along with another car, just adding to the challenges of the week.  Whenever we encounter challenges on a shoot, I jut remember Steven Spielberg and his stories of shooting Jaws, and I don’t feel so bad.

The rest of the shots in the film were captured over the Friday and Saturday of opening weekend.  We were still waiting for our long lens to get delivered from Canon Repairs for a second time (that’s a whole ‘nother horror story in itself) so we ended up shooting with the fs100 on Friday.  I was very happy with how she handled the cold and snow, although we did experience some of the highlight issues that have plagued the camera.

Saturday we came back, and were able to hook up with some of the best riders on the mountain to try to get some shots in what remained of the powder, as well as getting some production aerial shots with the phantom.  Filming at the summit at sunset it was pretty awesome to get so much attention from people excited about seeing the helicopter and coming over to watch on the monitor as we were filming.   I have to admit, the reaction to filming with the helicopter has not been as overwhelming by our clients as I had hoped.  I think the underlying issue is just that most people don’t understand how it works, how its used, and the ease of filming with it as well as the incredibly low risks to human life when its in operation.  To be honest, if we had the chance to go back and do it again, I’m not sure we would still have purchased it.

We are very excited about the film, its received an incredible reaction and hopefully this will inspire people to want to be in the Crotched Mountain ski films in the future.  We are immensely proud of the footage, and the overall edit, and we feel it shows ski mountains in New Hampshire the kind of cinematic possibilities that are open to them when the work with Earl Studios. 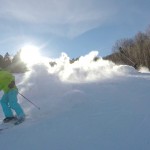