Since way back in the spring I had heard buzzings and rumors that Canon was going be releasing a budget/entry level full frame camera.  At the time I was shooting with Canon 7D’s and a Canon 60D, but I really wanted the full frame goodness that comes from a 5Dmk2 but after having shot with the 5dmk2 I just didn’t like it.  It felt like a brick in my hand, the controls were very oddly laid out and worst of all there was no 60p option.  Now for someone who shoots the type of films I shoot, slow motion is a must.  I learned that from my days shooting with the Nikon D7000.

So finally when the new 6D was announced I jumped on board, sight unseen, paying no attention to the warnings about its horrible moire and aliasing issues.  I mean, I’m not running around shooting brick walls or anything, right?  Well, this past week I headed up to my home ski mountain, Crotched Mountain, to shoot my first HD DSLR ski film with the Canon 6D.  It was during a good snow dump, and I need the mountain would be prime for a pretty nice shoot.

LCD VF from Carry Speed
The most vital part of my HD DSLR accessories for the Canon 6D is the LCD viewfinder.  When your out shooting on the mountain trying to pull focus of skiers and snowboarders barreling towards you, you need a good viewfinder.  None of the viewfinders I bought for my 60d or 7d’s fit so I decided to upgrade for a new one for the Canon 6D, and found one recommenced from Cheeyscam.com. Delivery was very fast, and when it came I was extremely pleased with the build quality, overall a nice LCD VF.  I have only two issues with it though, the first being that you can see a minimized reflection of the lcd inside of the viewfinder.  I’m not sure why this is, if its being reflected off of the internal glass, but its a bit annoying and distracting when looking at darker areas of the shoot.  The second issue, and somewhat more disappointing, is that when you switch the diopter all the way out to get focus, you get drastic vinyetting of the screen.  You do not see the entire screen because the sides are cut off by the rectangle of the top of the viewfinder, so you have to move your eye around to see the screen corners.  Other than that its a  good lcd vf.

Canon 6D Controls
The controls of the Canon 6D are laid out similar to the Canon 60D, with the live view switch taken from the 7D.  Using the quick menu its easy to switch settings, and I really appreciate the locking top dial because as I ski around alot of times I will accidently switch the camera out of “M” mode and go to shoot quick only to realize I’ve switched to “P” or “S” accidently, and then that shot is pretty much lost.  My BIGGEST complaint with the Canon 6D controls is with the movie record button.  It is a fiddly, squishy, unreliable little piece of work that thing!  You would think, as with the 7D’s movie record button, that you just push it down and whamo, your making movie magic, right?  But no, the Canon 6D movie record button is in my experience extremely unreliable.  I find, as odd as this sounds, alot of times i have to more push it slightly sideways than straight down to get it to start.  To my dismay, alot of times when I push it and pan over to get a shot, I find that my little red lights not on and in fact its not rolling at all.  Its very squishy and quite unreliable.  So fellow Canon 6D shooters, just be aware of this and make sure you’re giving her a good hard push when you start rolling.

Controls such as iso, shutter speed, and aperture are as you would expect them on any line from Canon, no issues there.

Head the warnings my friends, it is God awful!

Now, I watched the comparisons on Vimeo.com, I listened to the critics, but I was young and brash and thought “That doesn’t scare me, its not like I’m out shooting brick walls and tweed jackets all day!”.  But sadly, I was not prepared for the moire hell that would come my way when shooting with the Canon 6D.  It actually gave me cause to think about returning them, but after a while I thought of the brilliant filmmakers such as Philip Bloom and Vincent Laforet who had done amazing work with the Canon 5DMK2 and all of its moire issues, and so it became more of a challenge to me to become a better filmmaker, understand why these issues occur, and gain the knowledge and skill to work around them.  Below is a short sample of the moire and aliasing issues.

I’m very happy with how the final film came out.  It was a round day of shooting to be sure.  People think, “hey its snowing, thats the perfect time to make a ski film!”, but they are dead wrong.  When its snowing, really dumping, its the worst time to make a ski film.  Conditions are rough, its difficult to traverse holding a huge camera, and visibility can often be a challenge.  This shoot was a perfect example of that.  On the second shot, I had to traverse down Plutos Plunge, a black diamond trail, to set up for a shot, and as I made my way down I started to encounter pile after pile of thick snow that grabed my skis like fly paper, and sure enough, I went down, hard.  People tell me it was pretty beautiful though, how I held up the camera while I did a little ballet spin on one ski.  I wish I had got that on film.  But after digging out the snow from every nook and cranny of the Canon 6D, she was fine and we rolled on.  Because thats what you do, you drive on with the shoot. Shooting films in any situation is meant to be tough, challenging, and full of obstacles.  As long as no one is missing an arm, you keep shooting, I don’t care what the issue is.

The Talent
I’m blessed to have on my call sheet, some of the most outstanding skiers and riders in the state.  Not only are these people talented, but they are attractive and rather fashion savvy, they make my films look good.  We scouted out some runs and lines, and with Crotched Mountain Marketing Guru Chris Hudnor acting as my 2nd AD on the walkie, we coordinated a pretty fast smooth shoot.  It really is like a professional ski movie shoot with them, you have Chud plotting runs, the ever-cool Dylan (star of the “Midnight Madness” film”), choreographing lines and flow, Tim “the snowmaking guru” preplanning the best shot angles, and Jess and Adam adding that glow of love to the mix.  Don’t tell them this, cause it will go to their heads, but man, I think they are all pretty much some of the best people I know.

The Film
Shot on a Wednesday, we needed to roll this out before Friday to communicate the great midweek conditions we were enjoying at Crotched Mountain due to this recent snowfall and the great snowmaking temps we were experiencing.  Now, I get up at 4am every day, and I can thank the U.S. Army for instilling that wonderful habit in me, and I was able to cut this together Thursday morning and get it off to Chud at Crotched in just 24 hours.  Not bad.  So here it is, my first full frame Canon 6D ski film, “Snow Day” 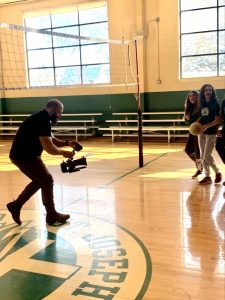