I started shooting haunted house films about three years ago, it would have been four years ago but they day I was scheduled to shoot my first got canceled due to a snow storm in October, so that was fun.  Each year I start looking forward to the haunt film season as early as June, watching classic horror movies and Ghost Adventures, so by the time September rolls around, I’ve story boarded and shot listed more than a few haunt film ideas.

This year was especially excited, it was our second year producing the films for Spookyworld in Litchfield NH, and this year they were doing something huge, with a multi million dollar investment in their new Haunted Hayride.  Traveling over a mile in length with 8 separate different sets, the work that they had done on creating the sets for this haunted hayride is something out of a Universal Studios tour. 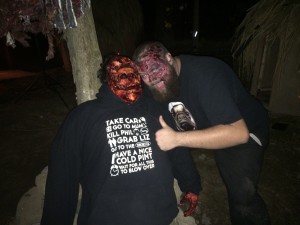 Sean  poses with our post cannibalized stunt double on the “Village” set.

We started proproduction in late August with some tours of the haunted hayride as the build team was wrapping up some of the final details on the haunts.  The first thing that blew me away was the sheer scope and size of the new haunt.  It was produced on a massive scale with all the details of a hollywood set.  From full size planes to houses to an entire trailer park, this was not some gentle entry into the genre of haunted hayrides.  After a few walk(drive) throughs I started to storyboard out my ideas for each of the five haunt videos we were going to produce to promote the new haunted hayride.  A shoot date was set, actors were lined up and after a year of waiting, it was finally time to shoot the first haunt videos of the season. 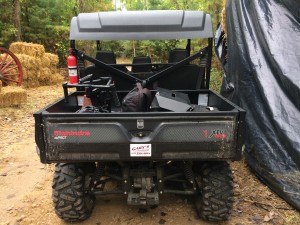 With the complicated nature of the shoots we broke up the 5 videos into 2 different shoots, as most of the videos take about 2 hours to film for a 60 second spot, and with us normally starting around 6 that runs us until around midnight.  Spookyworld did an amazing job helping with the preproduction and lining up all the actors we could possible need which was essential to the success of the filming.  Everyone was extremely high energy and excited about the concepts, and this is why Spookyworld is such a huge success, because the actors they have are high energy haunt people, they live for this, just like I do, and it shows in every single performance.

This years videos were more story based rather than a series of “jump scares” edited together and by the response from viewers and fans, it seems that we hit the mark with that concept.  The videos gained views in the thousands on the day they were released, with several of them having over 10k views so far.  I’m incredibly happy with how the final products came out, and I owe a great deal of the success to the amazing haunt actors we had working with us, as well as all of the coordination and preproduction that was done by Spookyworld “director of everything” David Cady.

The biggest takeaway I want people to get from these videos is that all of this, every aspect of this was shot, edited, and produced by one person, Me, Jeremy Earl Mayhew, owner and creative director of Earl Studios.  This wasn’t a team of 10 people, with a DP and a gaffer and PA’s with me sitting back calling “action” and “cut”.  From directing to focus pulling to lighting, vfx and editing, I do every aspect of the films I produce.  This shows that you don’t need a huge “studio”, lots of people and mammoth budgets to get incredible cinematic results.  The key component to the success of these films was TIME.  We took the time to plan it, we took the time to shoot it, and we took the time to edit them.

I’m incredibly grateful to the great people who run Spookyworld for the opportunity to produce a series of videos that are so key to the success of a multi million dollar venture.  It shows the faith they put in a small studio of one such as Earl Studios.  But even more so, I’m incredibly grateful to the haunt actors that not only gave 100 percent of their energy and enthusiasm to me during the filming, but who also have made me feel like part of the close knit haunt family there, and that is one of the biggest parts that I’ll take way from this seasons films.